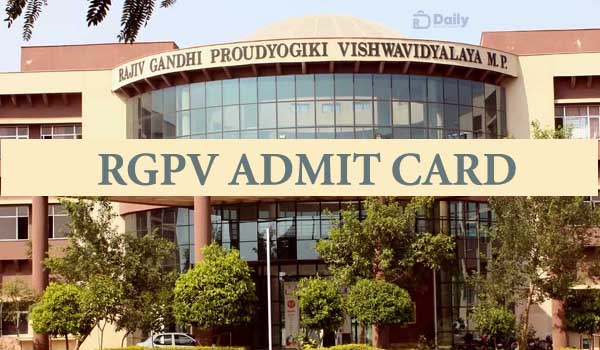 RGPV June Semester Exam Admit Card 2022: On the official website of the Rajiv Gandhi Proudyogiki Vishwavidyalaya (RGPV), they initially released the timetable for June semester examination for various courses. The courses such as MBA/ M.Arch/ B.Tech/ B.E/ BE-PTDC/ B.Tech-PTDC/ B.Pharm/ B.Pharm (PCI)/ B.Arch etc. In the RGPV June exam timetable they scheduled 03.06.2022 as the starting date of the examination. Based on the course the exam date may vary, so you have to once check the timetable clearly.

After getting RPGV exam admit card, Students have to read the details which have been mentioned on the admit card, because if you find any mistakes at the admit card, immediately contact the examination authority. This page is very useful for the students who are currently studying under Rajiv Gandhi Proudyogiki Vishwavidyalaya.

If you want to download RGPV B.Pharmacy Admit card/ RGPV D.Pharma admit card, then you have to enter the given details.

We hope that you can get full details about RGPV semester exam admit card. Be in connected with colleges.dailyrecruitment.in to get more admit card updates.